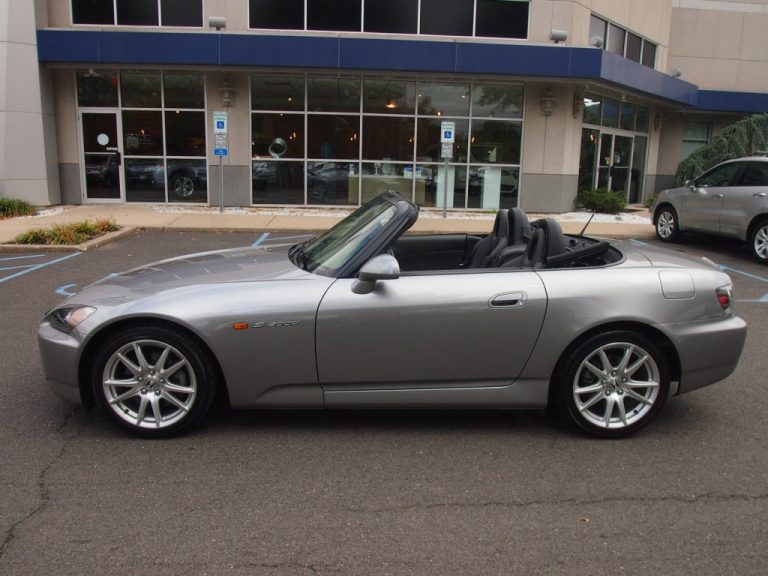 This 2005 Honda S2000 was acquired by the current owner from Bill Vince’s Bridgewater Acura in November 2014 with 6,819 miles and currently shows just 7,554 miles. It is powered by an 2.2-liter VTEC inline-four mated to a six-speed manual transmission and is finished in Silverstone Grey Metallic over black leather and a black convertible top. This AP2 S2000 is now offered for sale with three keys, two key FOBs, factory manuals, tonneau cover, OEM Honda car cover, and clean New York title in the seller’s name. The exterior is finished in Silverstone Grey Metallic (NH-630M) and features a black convertible top with a glass window. The seller notes that there is a minor dent near the fuel door, as well as some rock chips on the lower portion of the front bumper. All 10 VIN tags are present, and the vehicle has never received any paint or bodywork. Paint-matched front bumper plugs are included if a front license plate will not be installed. A fully digital instrument cluster with an 8.2k-rpm redline sits behind a leather-wrapped steering wheel. The two driver-centric panels include control switches connected to the factory AM/FM CD stereo located in the center console, as well as A/C controls and push-button ignition. The digital odometer shows over 7,553 miles, approximately 600 of which have been added by the seller. Both seats feature manual adjustment, with perforated leather center inserts to match the door panels and armrest. A dual compartment glove box is located below the glass wind deflector. Factory floor mats are installed under a pair of custom all-weather rubber mats.

Michelin Pilot Super Sport tires with date codes from 2014 were mounted and road-force balanced in the same year to the 17″ ten-spoke alloy wheels. The staggered-width setup measures 215/45 in the front and 245/40 in the rear. The space-saver spare tire, factory jack, and tool kit are housed in the trunk and have not seen use. No curb rash on any of the wheels has been reported. This AP2 S2000 is equipped with a 2.2-liter F22C1 inline-four featuring VTEC variable valve timing which engages at 6k-rpm all the way to the engine’s 8.2k-rpm redline. When new, this produced 237 horsepower at 7,800 rpm and 163 lb-ft of torque at 6,800 rpm, sent to a six-speed manual transmission mated to a Torsen limited-slip differential.

The seller notes the transmission, differential, and brake fluid were replaced in 2015. A coolant flush was also performed in the same year. An oil change using Mobil1 and OEM Honda PCX filter was recently performed and a new battery has been installed. The Carfax report shows no accidents or damage and lists emissions inspections and registration in New York. Dealer service records and factory literature from the original owner are also included. Additional photos can be viewed in the gallery below.