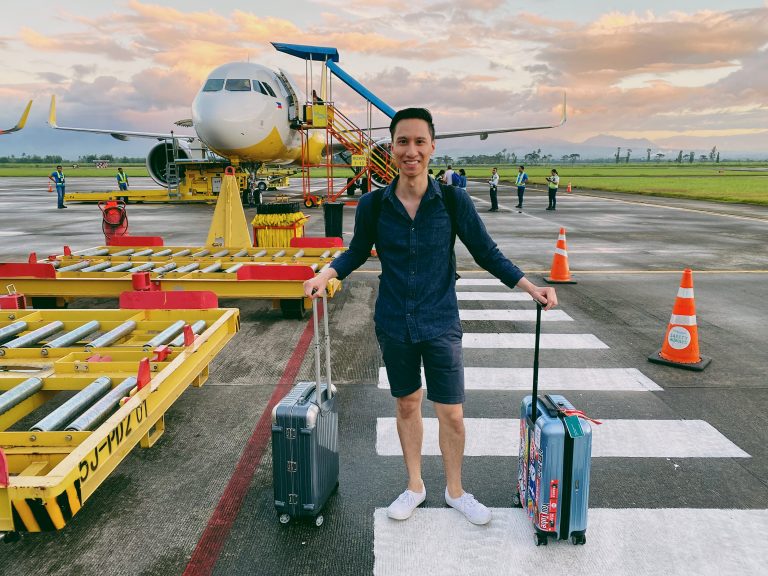 Cabin: There was only one, Economy

Frequent Flier Status: GetGo (not that the program is useful)

Seat: 22A (though all seats are the same on this flight!)

Cebu Pacific took delivery of their first A320neo a little over a year ago, and the airline has been using it to fly on longer international routes, with destinations including Tokyo and Singapore. Fortunately for me, I recently had the opportunity to fly on an Airbus A320neo delivered to Cebu Pacific that was less than one month old!

You may be wondering, “what makes this flight so special?” Well, Cebu Pacific is actually the first carrier in the world to utilize Airbus’ “Ultra High Density” configuration. The A320neo I boarded had a total of 194 seats, up from the 180 you would normally find on Cebu Pacific’s current A320-200 (CEO/Current Engine Option) aircraft.

Sure, one argument you can use here is that more seats equals increased capacity, “reducing” the congestion at crowded airports like Manila’s NAIA by offering more seats without adding additional flights. The way I see it, though, is Cebu Pacific has taken the concept of congestion and overcrowding in the Philippines and successfully brought it into the sky. That’s right, Cebu Pacific is trying to make their new Airbus into nothing more than a flying version of the crowded busses you would see on EDSA.

Nevertheless, any new plane is enough to get me excited. I also wanted to look at how Cebu Pacific would utilize the A320neo, having flown on PAL’s A321neo in Business Class the year before.

Since I was flying out of Bacolod, the small airport naturally ran out of gates with jetways and we had to walk outside and up the airstairs to board the plane.

I got to my seat and immediately noticed that, although everything was new, things were noticeably more cramped. The seats looked more narrow and thinner than normal. My dad even commented “the next thing will be standing room only, like an actual crowded bus”. The flight was full, and that added to the shrinking effect I felt.

With Captain Tony Stark at the controls, we took off into the sky to begin our super short 40-minute flight. This, ladies and gentlemen, was no joke! He literally called himself Tony Stark, and the cabin crew were quick to confirm. I didn’t know Tony Stark had a thick Filipino accent, but you learn something new every day.

In that time, I got to check out some aspects of the plane and Cebu Pacific’s service. If you’ve flown on Cebu Pacific within the past few years, you’ll notice this interior is similar to the new Airbus interiors featured on the A320ceo, but even more claustrophobic. Here are some photos detailing the experience: I didn’t get any photos of the bathroom since it was such a short flight, and I typically avoid the bathrooms anyway. With coronavirus out there and aircraft of this nature making multiple flights per day, I’ll stay away from the bathroom as much as possible.

Make no mistake, it’s a modern plane. New quieter engines, new everything and nothing was broken yet. But does that make for a more comfortable flight? To be honest, it’s fine if you’re in a good mood, your seatmate is playing nice and being a decent human being, and flight time itself is short. With my flight only lasting 40 minutes, I had nothing to complain about and can bear with the lack of breathing room and personal space. Not to mention, I was flying with my Dad. Had I been squished in between two strangers without modern day flying etiquette for more than a few hours (people who loudly FaceTime before takeoff, put their arm in my face in order to take multiple selfies, and get up before we park at the gate, I’m looking at you!), I wouldn’t be too pleased.

As more deliveries of these “Ultra High Density” A320neos to Cebu Pacific are completed, I think travellers will just have to get used to this new level of low-cost travel. On a brighter note, it’s nice to see Cebu Pacific taking delivery of new aircraft, versus leasing old ones as they did when they first entered the market. But for the love of flying and maintaining sanity in the air, I can only hope that these planes will be used more for super short routes and as few regional routes as possible. And I hope they turn on those USB ports soon as well.