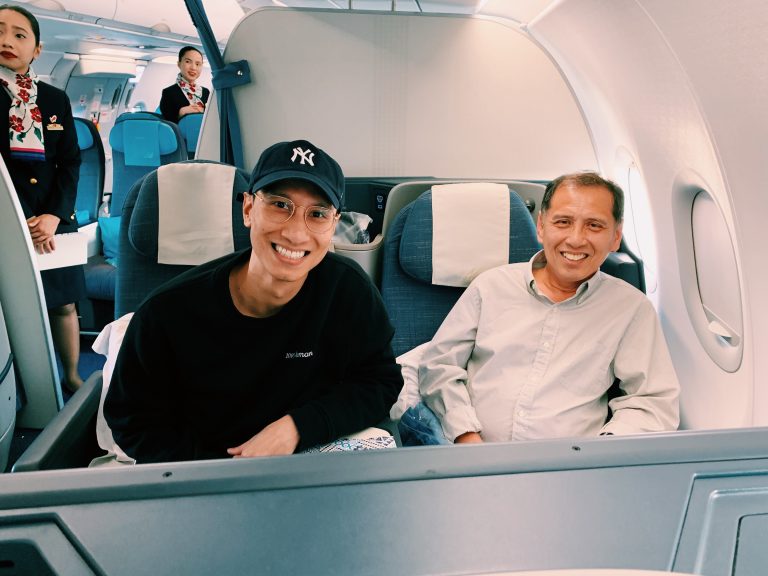 My Dad and I rarely have the opportunity to travel together these days. With him in New York and me in Manila, it’s not often that we get to experience the wonders (or sometimes, frustrations) of flying.

When the opportunity finally comes around for us to travel as a duo, I always try and make the experience as memorable as possible. In a way, it’s an attempt to relive my childhood, days when we would peek through the windows of the then-new Boeing 747-400s as he pointed out all the different jets of the time: McDonnell Douglas MD-11s, Boeing 737-200s, and even Lockheed L-1011s!

Naturally, I decided to surprise my Dad with round trip business class tickets for our Easter Week trip to Taipei. To be honest, I was pressured to, since Dad made some comments about how the Scoot A320 we flew to Singapore two weeks prior had uncomfortable seats, no amenities, extra baggage fees, and was crammed with rowdy travelers. As luck would have it, I found two reasonably priced Business Class seats on Philippine Airlines, and decided to take the plunge.

There aren’t many reviews out there for Business Class on Philippine Airlines, particularly their offerings on their narrow-body fleet. What I did know was that PAL’s Business Class on their Airbus A320s is just comprised of a wide “extra legroom” seat and an iPad taking the place of the typical seat back In-Flight Entertainment. There was no fold-flat seat, noise cancelling headphones, or forward footrest.

But I figured, “eh, why not?”. At least we would get to experience PAL’s soft product, board first, have some extra breathing room, and most importantly, enjoy a decent meal (and drinks) in preparation for our late-night arrival in Taipei.

I kept quiet about the surprise until the day we were scheduled to depart, giving no clue to our semi-luxurious journey that lay ahead. I mean, it wasn’t that glamorous anyway. We’ve flown in A320s with ancient Business Class products before, so why brag, right?

The Check In Process

On the Grab ride to the airport, Dad commented “What are we going to eat? We can’t use our Priority Pass to get into the Mabuhay Lounge in Terminal 2. There’s barely any food in the waiting area”. I paid no mind to this, and we continued with the traffic-laden journey to the terminal.

We arrived at the airport and the first clue that Dad got was when I said “meh, I don’t want to wait in that long line”, pointing to the regular Check-In line that was swarming with people. I got his passport and casually walked up to the Business Class counter, making sure he couldn’t hear my conversation with the staff. I turned around and said “I’m using you so we can check in using the Senior Citizen line!”

We got through check-in quickly as nobody else was in line. I kept his boarding pass so he couldn’t see “BUSINESS” written on it (not that he can see it without reading glasses, anyway). The second clue, though, was the blue “Business Class” luggage tag that the PAL staff looped onto our carry-ons. Dad quietly asked, “how did you get us upgraded from Economy so effortlessly?” I just grinned and said “it’s not an upgrade”.

I held on to his boarding pass for as long as I could until we had to get through passport control, at which point Dad saw his seat assignment and said,“wow! We’re really close to the front of the plane!” I just said “surprise! Got you a business class seat, Dad!”

Being the skeptic he is and the troll that I am, he didn’t believe me. We made our way to the Philippine Airlines Mabuhay Lounge. We were both surprised, albeit for different reasons. My dad was surprised that the staff let us in (he still didn’t think we were actual Business Class passengers), and I was surprised that the lounge was actually decent.

Honestly, it was certainly not the best lounge I have been to, but also not the worst. There was WiFi, power outlets, acceptable air conditioning, and plenty of room to sit down. Had I paid $4,000+ for a full-fare Business Class ticket from MNL-JFK, I would not be satisfied with this lounge. However, on this occasion, I had nothing but good things to say!

There was a variety of food, mostly the stuff you would find at airport lounges in Southeast Asia: a selection of dim sum, rice, a protein offering, and a variety of finger food. The quality was good, certainly better than the food stalls outside the lounge. Dad enjoyed eating more than a few portions of their chocolate cake, while I headed straight for the beverage section after sampling a few dumplings.

The drinks were great, with a bartender serving up hard drinks at the mini bar. Local and international beer as well as sodas were also offered at the self-serve fridges. I didn’t get to try the coffee, but it didn’t look like I was missing much. Dad and I chatted while we each drank two Black Label & Cokes before heading to our gate.

We were called to board and as we headed down the jetway, I noticed an Airbus A321neo parked next to our gate. I pointed to Dad and said “hey look, its one of the new neos, I wonder where that one is headed”. He said “maybe we’ll get one of those too”. I doubted it, then again, due to the positioning of the jet bridge, we couldn’t see the side of our own plane.

We rolled our baggage down the jet way and the second I got on the plane, I let out an uncontrollable “whoa! It is a neo!”. The flight attendant heard my excitement and matched it, saying, “yes sir, it’s a new plane for our flight today!”. I explained to him that I didn’t expect to be flying on one today, and how this was a super cool surprise for both my dad and I, since I had booked the trip as an early birthday gift to him. He greeted my dad with a “Happy Birthday!” and asked us if we would like a welcome drink.

My dad chose Philippine Airlines’ signature cocktail, a mix of calamansi juice and mint, while I went for the orange juice. This being a short flight on a narrow-body jet, I decided not to request for champagne and chose to wait till meal service for alcohol.

We had menus waiting for us at our seats, which had a fish, chicken, and pork option depending on if the flight was to or from Manila. Our flight attendant took our orders shortly after we finished our welcome drinks, with Dad obviously going for the fish and me opting for the pork. We also ordered some Heineken and more Black Label!

We settled into our seats and enjoyed the touch-screen IFE, loaded with enough movies, TV episodes, and music to keep us busy during our flight. The touch pad remote on the new IFE was a bit slower than actually tapping on the screen, so I opted to do that instead.

We took off and shortly after reaching cruising altitude, the crew brought out the table cloths and began meal service. The appetizer and main course came out on a single tray, with a choice of bread and our requested drinks coming shortly thereafter. Upon finishing dinner, we were offered some Carmen’s Best ice cream. Throughout the entire dinner service, the crew was very attentive. There was an even an extra crew member on board, not in a typical Flight Attendant uniform, but rather a classic Filipino barong and a PAL ID around his neck. As he did not introduce himself as the purser of our flight, my guess is he was some sort of upper management making sure everything on the new A321neo was as it should be, as he did help the crew from time to time with the business class passengers’ needs.

At this point, we had about an hour left in flight. I plugged in my iPhone to the USB port behind me to give it a quick charge, and went on to adjust my seat. We both enjoyed the new full-flat reclining seats, and I even dozed off until we had to go back to the upright position to prepare for landing. The seat itself was still very comfortable in the fully upright position, and I continued to nap while we went in for our final approach.

For whatever reason, the pilots aborted our landing in Taipei, as I noticed we went in for our final approach, slowed down, then suddenly took back off into the sky. Not sure what happened there, but we were then placed into a short holding pattern before successfully landing on the second attempt. This wasn’t a problem for me as I got to nap a little longer and fully reap the benefits of all the alcoholic beverages I had consumed earlier!

Would I do it all over again? Absolutely!

All in, our experience flying regional Business Class on Philippine Airlines was excellent! The great amenities, brand new aircraft, and excellent service from the crew was very enjoyable. Both Dad and I had not flown Philippine Airlines internationally for quite a few years now, but after our recent experience, we would do it all again in a heartbeat.

For more of my daily adventures as a coffee chuggin’, fast walkin’, slick talkin’ New Yorker finding his way around Asia, don’t forget to follow me on Instagram @ohnoitsericgo!